First, it’s finals week and you know how you’re supposed to study and all that. Well, memorizing, (I mean “studying”) for some of my classes, is boring but that’s good because I get new ideas out of boredom.

One of these ideas is about free food. On my campus, there are always free food “opportunities.” Every day there is an event with free food. Normally, you’d need to rely on your friends, Snapchat stories, or the school Reddit to find out.

But what if you create a place where you can find free food when you want it?

That’s exactly what I created with the UIUC Free Food Twitter Bot.

The way it works is that it’s a student-generated place where students find out and share free food opportunities.

Or think about it this way.

Know of free food? Submit the form for other students to know.

I just checked and the account already has 40 followers as well as thousands of views on the UIUC Reddit.

The biggest takeaway is that when you have an idea for something and you want to do it, you need do it as fast as possible. Inspiration is perishable.

In my case, I was in a differential equations class review session, and for some reason, I got this idea. I wrote it down as usual. I got back to my dorm at around 11 PM and the idea came up again. I felt the excitement and started working on it. I finished it and went to sleep a few hours later.

The two most exciting things are the creation and the distribution. The latter is exciting because that’s where I think about ways to get people to use what I created. In this case, through the creation of memes.

I said I had two things to share. Here’s the second one.

Yesterday, the UIUC Talkshow co-host sends me a Trevor Noah’s video on Elon Musk buying Twitter and using Tesla shares as collateral. Trevor’s argument is that Elon can use those shares to buy more things but the government can’t use those shares to tax him.

What Trevor touched upon is one of the most beautiful things the human mind and the power of abstraction together have created. That thing is called credit, and it’s the most essential part of the modern economy. It allows for human prosperity, progress, and happiness.

Unfortunately, people like Trevor and some senators do not see that. But I’ll explain it to them.

Credit allows us to build the present at the expense of the future based on the assumption the future will be better and more abundant than our present resources. We can build and create anything we want. Opportunities are endless if we can build things and create things in the present using future income.

In a world without credit, people believed that wealth was limited or even decreasing. The pie was limited. If the pie was limited, for your future to be better you’d need to assume that your kingdom, the entire world, and your life would be better and that it would produce more wealth at the expense of other people.

In Sapiens, Yuval Noah Harari explains, “That's why many cultures concluded that making bundles of money was sinful. As Jesus said, "It is easier for a camel to pass through the eye of a needle than for a rich man to enter the kingdom of God" (Matthew 19:24)”. If the pie is static, and I have a big part of it, then I must have taken somebody else's slice.”

That’s one of the big differences in our times. For me to thrive does not mean you could not thrive. The chances for you to thrive are higher if I thrive.

Lots of people have been impressed by the logo. I don’t blame them. It’s a piece of art. 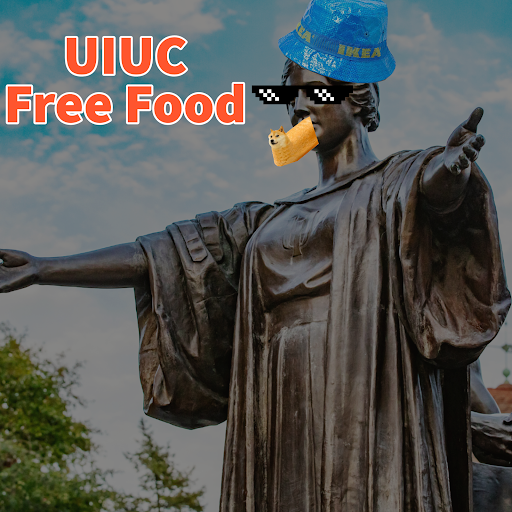 The emblematic art of the UIUC Free Food Initiative. Learn more at https://twitter.com/UIUCFreeFood
Created by jdcampolargoView on OpenSea

See you next week,

For your security, we need to re-authenticate you.